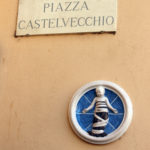 always considered it a crime, when attending international medical meetings, not to escape the academic ambience of seminar rooms, power point presentations, labelled lanyards and corporate coffee for the real and less organised world outside.  Despite the excellence of the biennial 6th International Clinical Skills Conference at Monash University in Prato, I felt little guilt in bunking off an afternoon session to visit Florence, just a 25 minute train journey away.  I have visited Florence several times before attracted like so many other visitors to the Renaissance art and architecture that is liberally scattered throughout the city, and so accessible, even if a wait, sometimes long, is involved for some of the main tourist attractions.

I was intent however on visiting the Spedale Degli Innocenti, the Foundling Hospital in Florence, construction of which started in 1419 and which continued as an orphanage until 1875  (1).  The building was commissioned by the Florentine Silk Guild, the Arte della Seta, one of the largest and wealthiest civic corporations in the city, and like many other guilds of the time with a philanthropic ambition, though perhaps driven more with an eye to public relations than to pure benevolence.  Nevertheless it mirrored the burgeoning humanism of the day reflected in its low and long design just two stories high, this was a building for the people on earth not a petition to the deity in tall and soaring church spires.

The orphanage is sometimes considered the “first Renaissance building” designed and constructed by Filippo Brunelleschi, the “father” of Renaissance architecture.   The “Innocents” in the name refers to the first born children murdered by Herod in his quest to dispose of the baby Jesus, as well as recognising the desperate circumstances of its charges.   Structurally the façade of the building consists of an open loggia with nine semicircular arches springing from classical columns of a composite order.  In the spandrels between each arch are circular ceramic reliefs created by the Della Robbia family depicting babies in full and half released swaddling clothes.  The height of the columns equals the distance between them giving a sense of order and simplicity to the construction.  There is much symbolism here, if we wish to engage in it, the beauty, simplicity and systematic nature of the façade suggests care and organisation, the ceramic roundels of babies in various stages of release from swaddling might suggest a desire for freedom and development.

Initially babies were abandoned on a “pila”, a type of basin beneath a window at one end of the loggia, behind which on duty women waited to receive the babies.  In 1660 this was replaced by a horizontal circular wheel which when rotated brought the child from the outside into the orphanage.  It is hard to avoid the symbolism of a rebirth here as the baby is delivered through the wall to caring hands.

This was a medieval hospital with a long term outlook providing social care and education from babyhood to adulthood, from wet nursing to work placement.  In the first three years 260 babies were admitted, by 1681 children under their care numbered 3467, most of whom were fostered with families in the city but still 800 in the hospital itself, girls outnumbering boys by 7 to 1.  The boys were given a basic education and placed in artisan workshops, the girls worked for the guild, married or became nuns but some remained for their entire lives in the service of the Hospital.  Currently the Ospedale remains active not only as a museum containing works of Renaissance art but also since 1988 UNICEF’s office of research.

Visiting today is easy, unlike the Uffizi or the Accademia, there are no queues, and indeed we were the only visitors and had the building to ourselves for half an hour or so.  Sitting in the courtyard it was almost impossible to imagine the din, activity and smell of an orphanage consisting of 800 children but the immense sense of peace created by Brunelleschi’s architecture and the total absence of visitors allowed me to consider that in the 15th century there was sufficient and established social conscience to entertain the construction of a magnificent and functional building from the foremost architect of his time for the least able members of their society.

The Corresponding Author has the right to grant on behalf of all authors and does grant on behalf of all authors, a worldwide licence (http://www.bmj.com/sites/default/files/BMJ%20Author%20Licence%20March%202013.doc) to the Publishers and its licensees in perpetuity, in all forms, formats and media (whether known now or created in the future), to i) publish, reproduce, distribute, display and store the Contribution, ii) translate the Contribution into other languages, create adaptations, reprints, include within collections and create summaries, extracts and/or, abstracts of the Contribution and convert or allow conversion into any format including without limitation audio, iii) create any other derivative work(s) based in whole or part on the on the Contribution, iv) to exploit all subsidiary rights to exploit all subsidiary rights that currently exist or as may exist in the future in the Contribution, v) the inclusion of electronic links from the Contribution to third party material where-ever it may be located; and, vi) licence any third party to do any or all of the above. All research articles will be made available on an Open Access basis (with authors being asked to pay an open access fee—see http://www.bmj.com/about-bmj/resources-authors/forms-policies-and-checklists/copyright-open-access-and-permission-reuse). The terms of such Open Access shall be governed by a Creative Commons licence—details as to which Creative Commons licence will apply to the research article are set out in our worldwide licence referred to above.