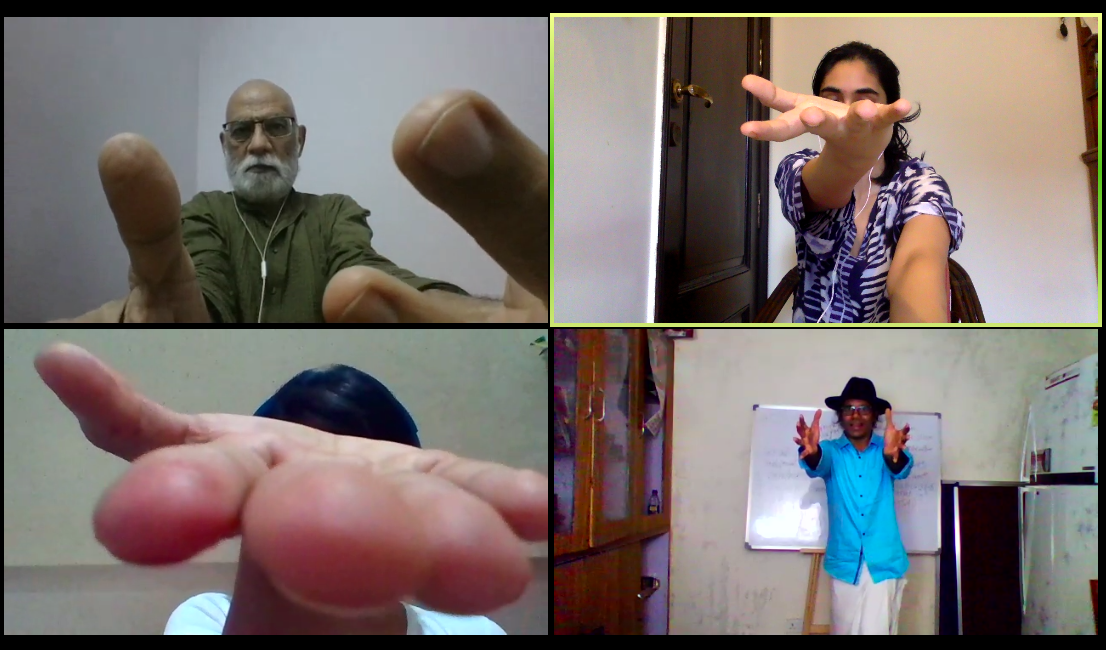 By General UpdatesOctober 20, 2020No Comments

“As people we cannot care about external oppression without caring about internal oppression. I discovered that we all have cops in our head – knowing that the headquarters are outside” –Augusto Boal, 1989

Augusto Boal, a Brazilian theatre director and politician, founded Theatre of the Oppressed (TO) in the 1950s – a creative tool set of games and exercises for personal and social transformations. Participants are guided through these games by a TO facilitator – a ‘Joker’ – and create performances that explore and debate the mechanisms of oppression that exist in their communities.

In 2011, the Centre for Community Dialogue and Change (CCDC) was founded in Bangalore, India. It aims to use TO methodology to activate transformations in the education and development sectors, within the frames of medical humanities and mental healthcare. CCDC’s community workshops and their annual open facilitator trainings have always emphasized the theory behind the praxis, especially Brazilian educator Paulo Freire’s (1921-1997) ideas of critical pedagogy, and the need for participatory methods of engagement with communities. What emerged from CCDC’s 10 years of experience working with rural women, youth from underprivileged backgrounds and educators, was the urgent need for spaces that promote, besides dialogue amongst community members, also dialogues within each person. Over and over, the stories that were shared during these times revealed the protagonist’s inability to shake off internalized oppression as a response to an external oppressor.

For example, at a TO workshop conducted at the University College of Medical Sciences (UCMS), a performance emerged about the discrimination that Doctors with Disabilities (DwDs) face in healthcare settings. The play displayed how the education curriculum projected disability as a deficiency, causing doctors to internalize ableism. Dr. Satendra Singh, a Joker who has trained at CCDC and an Associate Professor at the college recalls:

“The discrimination inherent in the deficit-based model forces DwDs to see their disability as a weakness. They do not fight for equal opportunities even though they may be as clinically competent as the rest of their peers.  Social transformation is then impossible without addressing the repercussions of these internalized oppressions.” 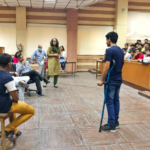 “No you cannot become a doctor!” Mid-scene in the Forum play at University College of Medical Sciences.

Over the years, CCDC’s TO workshops have trained Jokers such as Dr. Satendra Singh to take TO interventions into their own communities. Trained Jokers, number over 300 today, come from India, UK, USA, Australia, Egypt, Taiwan, Bangladesh, and the UAE. They represent a variety of disciplinary backgrounds – performing arts, education, medicine, psychology, and the nonprofit sector.

Until March 2020, before the pandemic and the lock-down, Jokers based in Bangalore would meet once a month to discuss their facilitation experiences and reflect on practice. These meetings were an opportunity to share both personal and professional challenges. As such, they were a nourishing and precious resource for the Jokers. When the lockdown hit, CCDC’s workshops and the monthly Joker meets had to be suspended for an indefinite length of time,

“I felt a great sense of loss. We could not gather as a group of people interested in using theatre to explore our lives, to share struggles and build new worlds based on new possibilities. So much was happening in our communities- people were in complete isolation, many were losing jobs, migrant workers were trudging hundreds of miles to reach their homes, there was a rise in domestic violence, and the media was full of reports about the high levels of stress and anxiety created by the uncertainty surrounding Covid.”

Clearly, the need to connect was urgent. What role (if any) could TO play in these times? How could theatre that is such an embodied practice, take place or be enacted in a no-contact mode?

Radha mooted the idea of an online gathering on the Joker group and on April 18th, with 15 participants, CCDC’s first virtual Joker meet took place. Lockdown stories were narrated. Some of the emergent questions and themes are worth revisiting:

It became evident to the Jokers that during lockdown many individual internal discomforts, anxieties, griefs and fears had re-surfaced.  Without the relief or distraction of going out, they were feeling trapped – forced to look at themselves and their lives.

At the meetings that followed, the Jokers began to investigate these questions using Image Theatre, a method used in TO. In this method, performers create frozen images with their bodies as a way of coming closer to their subconscious feelings. The process of ‘thinking’ with bodies rather than words or thoughts, can short-circuit the censorship of the brain, or what Boal terms the ‘cops in our head’.

During one session, Dr. Mani Kalliath – a mental health activist – asked the group to create an image of what the conversations had triggered in them. In groups of four, Jokers went into smaller breakout rooms, experimented with elements of the camera frame and froze their bodies in different shapes. [ Use/Refer to Image 2 within the blog]

Akhila – a Joker- recalls her experience of this exercise –

“Without using any words, all of us, spread across different spaces and screens, sculpted our bodies into a visual. We kept dynamizing our movements and ultimately froze when the collective image evoked the complexities of our feelings. With this exercise, there was an opportunity to not only express our individual thoughts but to also be supported by a community of three other bodies.  In our group we each used our hands in different ways – I had my hands pointing out, while another Joker did the same gesture but close to the camera so you could only see her fingers and mouth. The other two created boundaries using different parts of their palms and arms. The final visual was cinematic and corporeal at the same time. It emphasized feelings of both hope and hopelessness that I had been struggling to articulate to the group. When we showcased this image to other Jokers in the main meeting room, they said that the image evoked a sense of ‘reaching out’ ‘restriction’ and ‘fear.’  These contradictory voices in my head had manifested themselves visually on a screen before me and in that moment, I felt seen, heard and supported.” 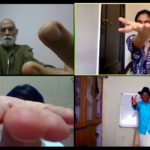 After a few sessions, the Jokers shared their thoughts on participating in TO games online:

I thought it would be worth trying out to relieve the boredom of lockdown, and as a scaffold to lift myself out of the depression I found myself in. I wondered how the TO spirit of sharing one’s deepest feelings would play out online. As I became familiar with the participants, I noticed a change. Jokers are special people. They are accepting, and welcoming.

The empathy building experiences have organically found their way into my work and personal space in different ways.

This is a space of connecting with my own anxieties and insecurities in these times. I did resolve a few in the process.

In a world that is looking increasingly senseless, with uncertainty as the only reality before us, and with human contact clouded over with fear and suspicion, the online Joker meets provide a space for TO practitioners of all ages (the current group is between 16-67 years!) to connect through their shared training. The TO games and exercises stemming from lockdown narratives, help each Joker to make sense of their inner voices. According to Radha, the real human connections established through stories shared, and the continuing opportunities to grow in the practice of TO, make CCDC’s online Joker meets, now into their 25th week, a unique space of personal transformations.

Dr Radha Ramaswamy is an educator, and the founder of Centre for Community Dialogue and Change (CCDC), Bangalore, India. You can write to her at contact@ccdc.in

Akhila Khanna is an applied theatre practitioner from New Delhi, India. She facilitates TO interventions with communities in India and the U.S. You can read about her work and contact her on her blog.